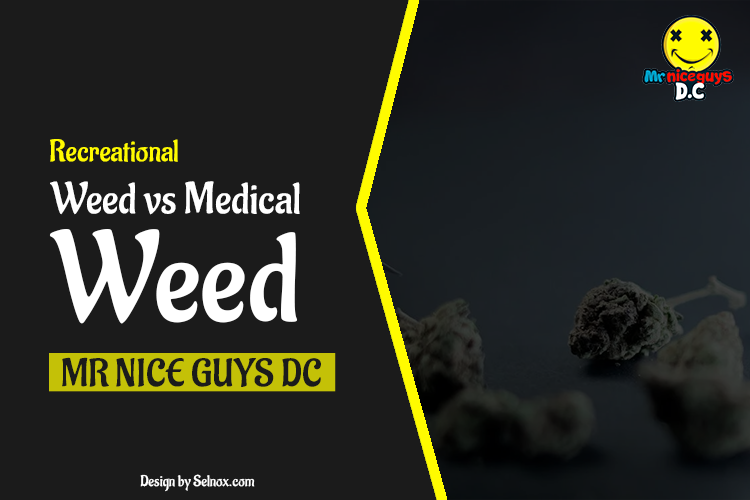 Both Recreational weed, and Medical weed are  psychoactive drugs , produced by the cannabis sativa plant , and yet they offer vastly different experiences to their users and experts. When we hear about weed it looks similar but many more thoughts come to mind such as “ weed is something that people smoke”  but in others it blinks like “ weed is something that is used to treat cancer or it is herb”. Although all these thoughts are correct about recreational weed and medical weed. Comparing and contrasting the two forms of weeds based on their uses, their extraction, and their results show how different and similar the two are.

When talking about Medical weed , it is only available at dispensaries. It requires a certification and a recommendation from a physician. Medical marijuana products are highly regulated by the state/countries. Furthermore, dispensaries are required by law to have to prove their products free from residual solvents, mould, and heavy metals in an independent , third-party lab test. These labs also verify that the reported percentages of THC and CBD are accurate.

While recreational weed is available for Adult-use (recreational) cannabis refers to laws that allow anyone over the age of 21 to use cannabis.Some states / countries laws treat weed like alcohol by allowing adults to buy the substance without a doctor’s recommendation. Recreational weed is often consumed for its enjoyable mind-altering effects,Feeling of joy, relaxation, increased sense of sight, hearing and taste, and increased appetite.

As per the initial research and observations have to let some results about the Medical weed that it is used to treat Anxiety and depression, Chronic pain, ADHD, Insomnia, Side effects cancer like nausea, wasting syndrome, Epilepsy, OCD, Glaucoma, Post-Traumatic Stress Disorder, Muscle spasms. But it is important to consult the doctor before self medication.

The key things that make Recreational weed different from Medical are  most of which are distinguished by the industry: accessibility, cost, and THC/CBD levels.

Medical Marijuana Card(MMJ)- This identification card issued by the state/country that permits a patient with a doctor’s recommendation to cultivate,obtain or possess weed for medicinal use . A patient needs to pay a fee to obtain a Medical Marijuana Card. It gets renewable after the required interval with the same process.

In the USA , weed is illegal under federal law for any purpose either use or possession by the way of the Controlled Substances Act of 1970. Despite this, most states have legalised either or both the medical and recreational use of weed. The medical use of weed is legal in 37 states of USA and in 21 states it is legal for recreational purposes.

Even though medical weed and recreational weed are major parts of psychoactive drugs, produced by the cannabis sativa plant, they have many differences along with their similarities. They have vastly different costs, chemical levels,legal status , accessibility but they remain similar in their growing process.